Nicholas Roemmelt at The via… – Milky Way Chasers
Skip to content 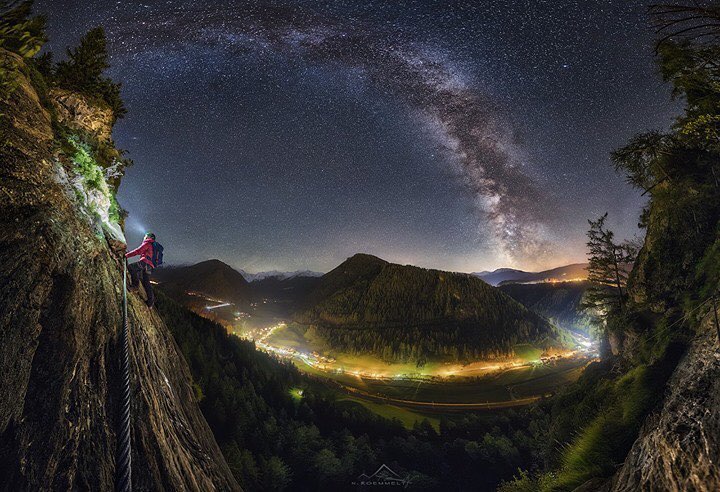 Photo Caption: Nicholas Roemmelt at The via Ferrata
—
REPOST: @nicholasroemmelt from facebook.com/groups/milkywaychasers chosen by @matthewsavillephoto
—
MWC Admin: @tracyleephotos
—
#milkywaychasers to be featured or post on Facebook.com/groups/milkywaychasers. Tag a friend who might enjoy this Milky Way image and journey!
—
From Nicholas about this image:
—
AFTER WORK CLIMB
3 row Panorama + Exposure Blend + Focus stack
EXIFS:
Canon Eos 1 DX Mark II; Sigma 14mm f1.8
3 row panorama with 6 upright single shots, fokus stack + exposure blend
f2.8, (0.5 -25s), Iso 6400
Story:
Days are getting shorter, the nights cooler but that´s no reason not to go on an afterwork climb. After weeks with horrible weather there there finally had been a star bright night on last Thursday again, so we climbed the Peter- Kofler fia ferrata after work. Photographing in the night on a via ferrata is always linked to a considerable effort: Having an idea where to place and how to place your tripod in a steep climbing route is a good start for such ventures in the middle of the night. Already the smallest mistake might lead to a total loss of your equipment and you better know how to belay yourself and your equipment hanging hundreds of meters above the ground in a steep face with a probable hair-raising exposure.
The via Ferrata is located only several hundreds of meters above the village of St. Jodok in Tyrol, so needless to say we informed the local mountain rescue team about our venture. We wanted to avoid an operation due to a mistaken emergency call at the rescue team.
Light pollution as well as the shallow depth in field with an aperture </= f2.8 made it necessary to capture an exposure series as well as a focus stack for the single positions of the panorama. As the Milky Way is already standing high in the sky after the end of the astronomical dusk, I had to capture 3 rows to catch the whole scenario. It took me roughly an hour capturing all pictures needed for the 3 row panorama while I was hanging in my harness, so you better bring a comfy climbing harness!
Social:
instagram.com/nicholasroemmelt
fb.com/Dr-Nicholas-Roemmelt-Photography-229900307156150
—