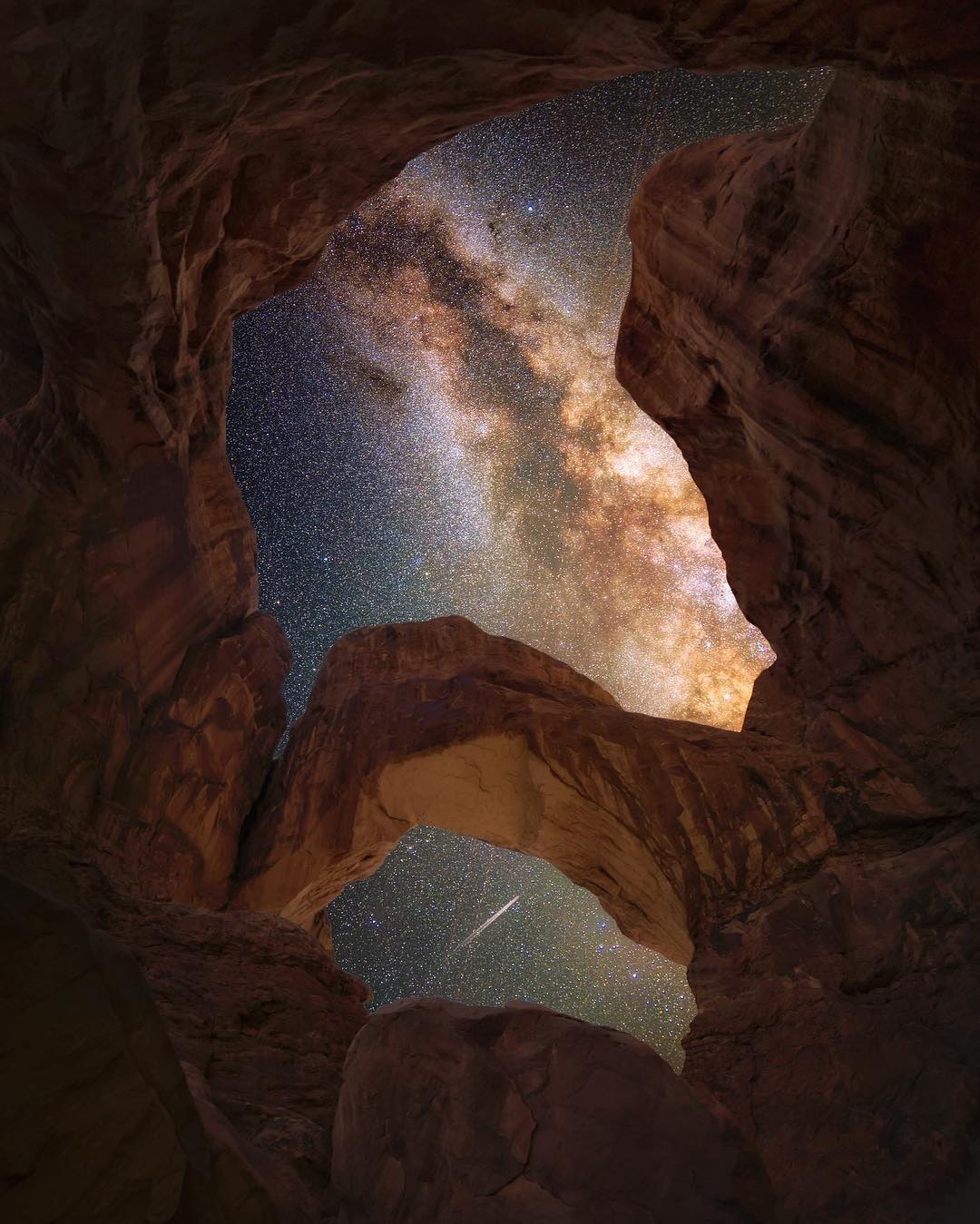 Photo Caption: #COMPOSITEWEEK
—
Jaxson Pohlman in Arches
—
REPOST: @jaxsonpohlmanphotography from facebook.com/groups/milkywaychasers chosen by @matthewsavillephoto
—
Milky Way Chasers Admin: @tracyleephotos
—
#milkywaychasers to be featured or post on Facebook.com/groups/milkywaychasers. Tag a friend who might enjoy this Milky Way image and journey!
—
From Jaxson about this image:
—
COMPOSITE | TRACKED —-
Instagram.com/jaxsonpohlmanphotography
fb.com/jaxsonpohlmanphotography —
“Passages”
After a busy day shooting around Arches National Park, I waited in my very hot van near Double Arch to shoot during Flat Light. Eventually, it was time and I was lucky enough to be there by myself during my most of my session. It’s normally very busy as you would expect, so it was really beautiful being there alone. I had intentions to create this specific composite, so I made sure I could shoot during Flat Light and shoot a panorama of Double Arch. It worked out smoothly!
The sky was captured during my first session using my Sky Tracker. The exposure was just a bit over 16 minutes at ISO 400. I was 15 miles or so outside of Pratt, Kansas where the sky was very dark and had a place to stay. I intentionally flipped the sky to implement a bit more of a sci-fi feel to the final image. The interesting thing about the final image is that you can rotate the photo and imagine a new world each time you flip or rotate your phone, laptop, etc. There is no intended orientation of this image, allowing it to be a bit more immersive and individualistic for the viewer. Hence the title “Passages”. What’s your favorite side to view the image? —
EXIF:
Nikon D3300, Rokinon 14mm.
—
(Foreground): f4, ISO 400, 1/60 sec. Double Arch, Arches National Park. (Sky): f2.8, ISO 400, 961 seconds (approximately 16 minutes) on my Star Adventurer Star Tracker. The photo was taken about 15 miles outside of Pratt, Kansas.
—
.
.
.
.
.
#longexposure_shots #nightimages #nightshooterz #nightshooters #nightpics #milkywaygalaxy #astrophotography #astrophoto #astro_photography_ #astro_photography #longexposure #longexpohunter #longexpo #amazing_longexpo #amazingearth #natgeospace #milkyway #nightphotography